Following foreigners who attend matches is generally a much more efficient way of finding out what’s going on around the grounds than on any of the regular media sites and Paul Neat is one of the best at it. While live tweeting Daejeon vs Anyang, he and Park Inhyeok of his beloved Citizens combined with this beauty:

Gyeongnam returning from the depths of K2 to finish in the ACL spots came close, but this has to go to 48Shades’ own Paul, who was spotted moonlighting on TV this autumn looking like Kim Byung Ji in his late nineties-pomp.

Whether he borrowed some cream from Kang Su-il or not, we don’t know nor do we dare ask – in fact we’re only writing this because he’s currently overseas and we’ve temporarily changed the passwords but either way, the results were spectacular. At this rate, by this time next year, he’ll have gone the full Valderrama.

Matt Binns began the year by buying a Suwon FC season-ticket and then promptly moved to Seoul. All of us know what it’s like to be far away from home and how much expense, planning and effort goes in to taking those trips back. Therefore we empathized with and were excited for Matt, who in early November, finally made the punishing 30-minute bus ride from Sadang Station to the Suwon Civil Stadium: 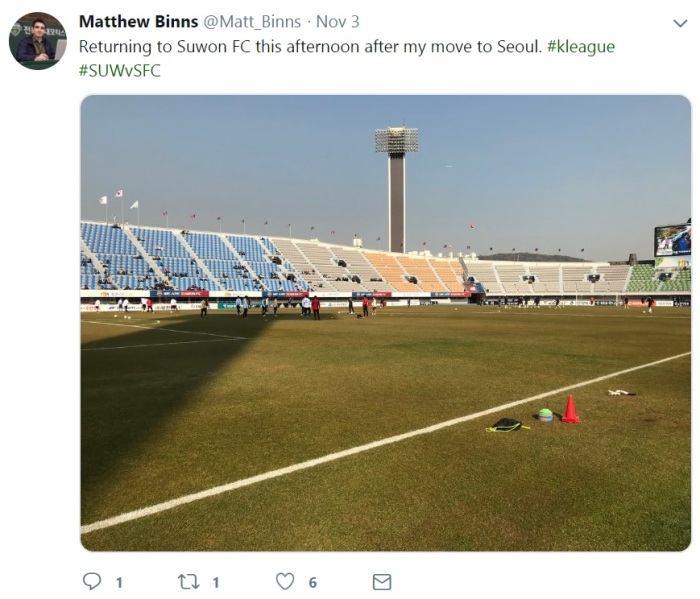 Matt also wins this year’s “Best Picture of the Best Floodlights in the World” for the above awesome shot featuring the shadow of one of the Suwon lights and a full-frontal view of another. We don’t know how long it took to recover from the inevitable jet-lag but two awards from just the one trip surely makes it all worthwhile.

When he’s not being driven to distraction at work, there are two things that everyone’s favourite expat with a Degree in Music and Internet Ordination loves doing: 1. Climbing Jirisan and 2. Hating FC Seoul. One’s logical and the other plain stupid; I mean, who climbs the same mountain that often?

Anyway, you wouldn’t think there’s much synergy, would you? Au contraire:

That's reasonably easy as the only trophy FC Seoul have won on merit since 2015 is the mighty Saitama City Cup in 2017. #KLeague