Yesterday I took the plunge and hopped on the Suwon FC Supporters’ bus heading to Ulsan for their FA Cup match. The good lady dropped me off at our stadium just before 1p.m.  As we waited for the bus to arrive, it was clear a midweek trip to Ulsan was not possible for a number of the dedicated fans regularly found in the temporary stand at 수원종합운동장 as well as other K League 2 stadiums.  The wisdom of having FA Cup matches midweek is a topic for another day however.  When the bus set off around 1:10p.m, I’d say there was between 20 and 25 people on board.  Around half of those were members of staff.

Being my first trip on a Korean supporters’ bus I had no idea what to expect.  Truth be told, it’s probably been more than 20 years since I was on any kind of supporters bus.  I can still recall the excitement, speculation, arguments, and singing that came with getting on the St. Mary’s CSC from the Barnyard and latterly the Clock Bar in Dundyvan.  This was something very different. 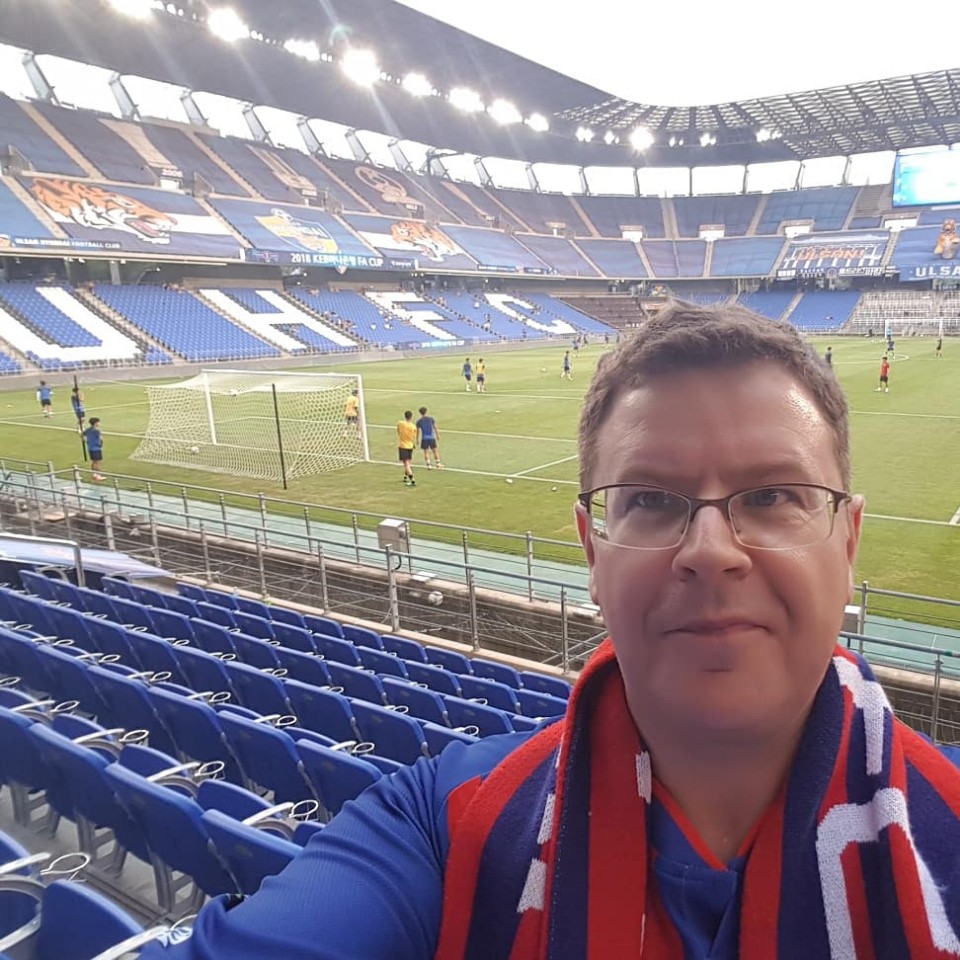 There were plenty of nods and “annyonghaseyos” but it was a disjointed group that set off.  My limited language would have been tough to overcome but the different parties – a couple with their daughter, two sisters/friends with one of their sons, an older couple, two teenage lads and a few individuals like myself – all kept themselves to themselves.  Seats were taken, headphones stuck in and everyone retreated into their own bubble.  And to be honest, it suited me to a tee.  By the time we stopped for our first break, I’d gotten through two podcasts (Talking Tigers and The Celtic View) and started reading Hings by Chris McQueer on the kindle.  This trip was actually proving productive.  Then just as I was weighing up my next move, the latest 48 Shades of Football podcast dropped and I had the dulcet tones of The K_League Kilt and The Phantom accompanying me on the road to Ulsan.

At around 5.30p.m we stopped again for dinner – service station style.  It was the tried and trusted 돈까스 for The Alternative View.  Again, most people ate in their groups or in my case, on my tod. And again it suited me to a tee.  Maybe I am quite an anti-social guy after all.  We set off around 6.10 and half an hour later we were parking up at Ulsan Mun Su Stadium.   As someone who has spent the season going to predominantly civil stadiums in K League 2, Ulsan was quite an impressive stadium and most importantly beer was on sale in the away end.  Only Fitz but by this time I wasn’t caring.

At this point, I’d like to tip my hat to Suwon FC.  I knew the bus was free and they gave us water and ice cream but they also bought the match tickets (\12,000) for us fans.  Given the numbers of travelling fans, it obviously wasn’t a huge outlay but it’s the thought that counts, right?  I really should find out if this is the case for all away matches.  Have I been ripping myself off?

As we took our places, a quick head count identified that 12 supporters had been on the bus.  The rest had been staff, some of whom had gone to other parts of the stadium, some of whom stayed up the back of the stand.  The Ulsan Fifteen of the title was made up of us twelve plus three relatives of either Bruno or Alex who had made their own way down.

At this stage a major issue dawned on me.  The majority of The Real Crew was not in attendance.  Those that lead the chanting and bang the drums were otherwise engaged.  After a quick look around, I found myself second in command (one super fan had made the trip) when it came to trying to generate support for our lads out on the park.  The problem being that, apart from some key words (pretty much “Suuu Wonnn  Effff Ceeee”), I don’t really know the chants, I’m more of a clapper.  But, it was time to get some Fitz in me and step up.  I’ve no idea how successful I was in inspiring our boys but I do know my throat has been rasping all day.  I think my fellow fans had an appreciation of the commitment and passion this foreign fan was showing but also a kind of fear or disgust at the aggressive tone and colourful language the game brought out in me.

As for the game, it pretty much reflected our season in a nutshell.  Suwon FC played well enough and matched a strong Ulsan team for the majority of the game but lacked class and penetration in the final third.  It felt like so many games I’ve watched this season.  Too often we’d turn back from promising positions, look up to see no-one in the box or simply play an awful final ball.  One loose chipped pass after 52 minutes was intercepted and a few crisp passes and a nice finish later Ulsan were 1 up and, given our well-documented goal scoring woes, the tie was done.  Suwon FC worked tirelessly but never really looked like equalizing.  Yet again, the players put in lots of effort but finished up with nothing to show for it.  We can only hope that our new Brazilian striker Fernando Viana has the magic touch and can start banging in the goals while the playoffs are still within reach.

With the cup dream over for another season, it was back to the bus and the 4 hour trip back to Suwon.  As before, most people either slept or retreated into the world of their smartphone.  I followed the other results on twitter and attempted to console the Kilt over Seongnam’s elimination at the hands of Gyeongju HNP.  Seongnam really do have bigger things on their mind.  Anyway, with just one quick piss stop and a driver in a hurry we arrived back at 수원종합운동장 at 1:30a.m.  After a quick goodbye to my fellow fans, I headed off in search of a taxi and finally collapsed into bed around 2a.m.

The trip was very different to trips back home and possibly even to trips you guys have taken to watch your team.  However, I enjoyed it.  My days of heavy drinking, especially on buses where piss stops are at the mercy of others, are long gone and I wasn’t looking to make new friends for life, but it felt good to part of The Ulsan Fifteen.  We were a motley crew, not really any closer than at the start of the day despite spending nine hours together on a bus, screaming ourselves hoarse and for what?  To support Suwon FC, that’s what!

Mind you, it will be good to have the real singers and drummers at the rest of the games this season.