The Alternative View (should probably re-name it the Suwon FC View) returns after being stung by the outrageous allegations in last week’s podcast that I only write when I’ve something to be negative about.  I assure you my absence was all about final exams, grades and summer camp (one more day to go!!!) and nothing to do with an upturn in the fortunes of Suwon FC.

In the seven weeks since my last post went up (the day Bucheon pumped us 4-1, so it doesn’t count), Suwon FC is undefeated.  No doubt the summer break had something to do with such a long unbeaten run but a 1-0 win at home to Anyang before the break was followed after it by 1-0 and 2-0 away wins at E-Land and Daejeon respectively and a 1-1 home draw with Gwangju last weekend.  10 points from 12 has dragged us up to 7th in the table, just 4 points off the final playoff spot.  Mind you, bottom of the table Anyang are only 10 points off it.  It’s a tight old league, K2.

My last post partially reflected on the 2-0 home loss to Asan and the “Kim Dae-eui Out!” banner that was displayed.  The game after was the 4-1 away loss to Bucheon where there was no sign of any banner.  That was followed by the home win over Anyang where despite the victory, the banner again re-appeared.  On this occasion, Adrian Leijer (unfortunately injured away at E-Land and looking at an extended spell on the sidelines) gesticulated to the fans to put it down and they duly did.

I was genuinely surprised to see the banner go up after a win.  But it did seem to reinforce the perception that the fans had had enough of life supporting a Kim Dae-eui team and that the writing was on the wall for the manager.  Given this mood of unrest, how have things turned around for our heroes in red and blue?

Like every club, there has been a fair old turn around in players during the summer with at least four, including Brazilian striker Matheus, heading out the exit door.  Some more experienced players and a few returnees from military service have boosted the ranks.  Adrian Leijer’s injury and Cho Yumin’s call up to the Asian Games squad will mean plenty of opportunities for the defenders Kim has brought in.  It remains to be seen if Matheus’s spot will be taken by another foreigner or not. 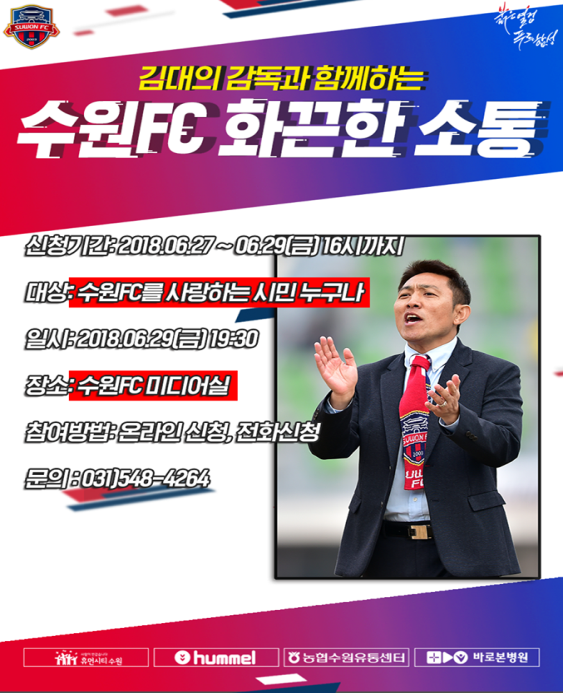 While new players and more time on the training ground during the break must have been helpful, I’d like to suggest that June 29th played an important role in the change of fortunes and attitudes around Suwon FC.  At 7:30pm that day Kim Dae-eui held a meeting with fans.  I did not attend the meeting but I admire Kim Dae-eui for doing so.  He must have approached with a sense of dread given the record at that time stood at 5 wins, 1 draw, 10 defeats and the mood among the fans likely to attend was pretty toxic.  I’ve no idea whose initiative the meeting was but I can’t imagine there are many managers who would relish such a prospect.  There have been posts since commending Kim on his approach to the meeting and the relationship between manager and fans has improved.  For the moment!!  Bob Hoskins was right!!

That’s speculation on my part but it must have felt good for Kim to have the rain-drenched fans chant his name the following night after a deserved win over E-land at Jamsil.  I am in no doubt though that the endeavour of the players in the games since then has gone up a level or two.  It is ridiculous for me to claim that professional players were not trying before this meeting but to the naked eye there seems to have been some kind of shift in mentality over since the league resumed on June 30th.  To be honest, the effort and attitude in recent games is all I ask for in my team.  I have come to accept that this squad is limited and, despite my earlier praise, I worry about Kim’s 4-3-3 which tends to leave our central midfielder exposed, but if they show me they’re busting a gut, I’m OK with it.

As a quick aside, I took in our most recent match, an entertaining 1-1 draw at home to Gwangju, in the company of @kleague_kilt.  There was plenty of chanting, indecipherable screaming and the scaring of young kids with colourful language from one of us.   To be honest, I’m not sure he’ll be welcomed back. 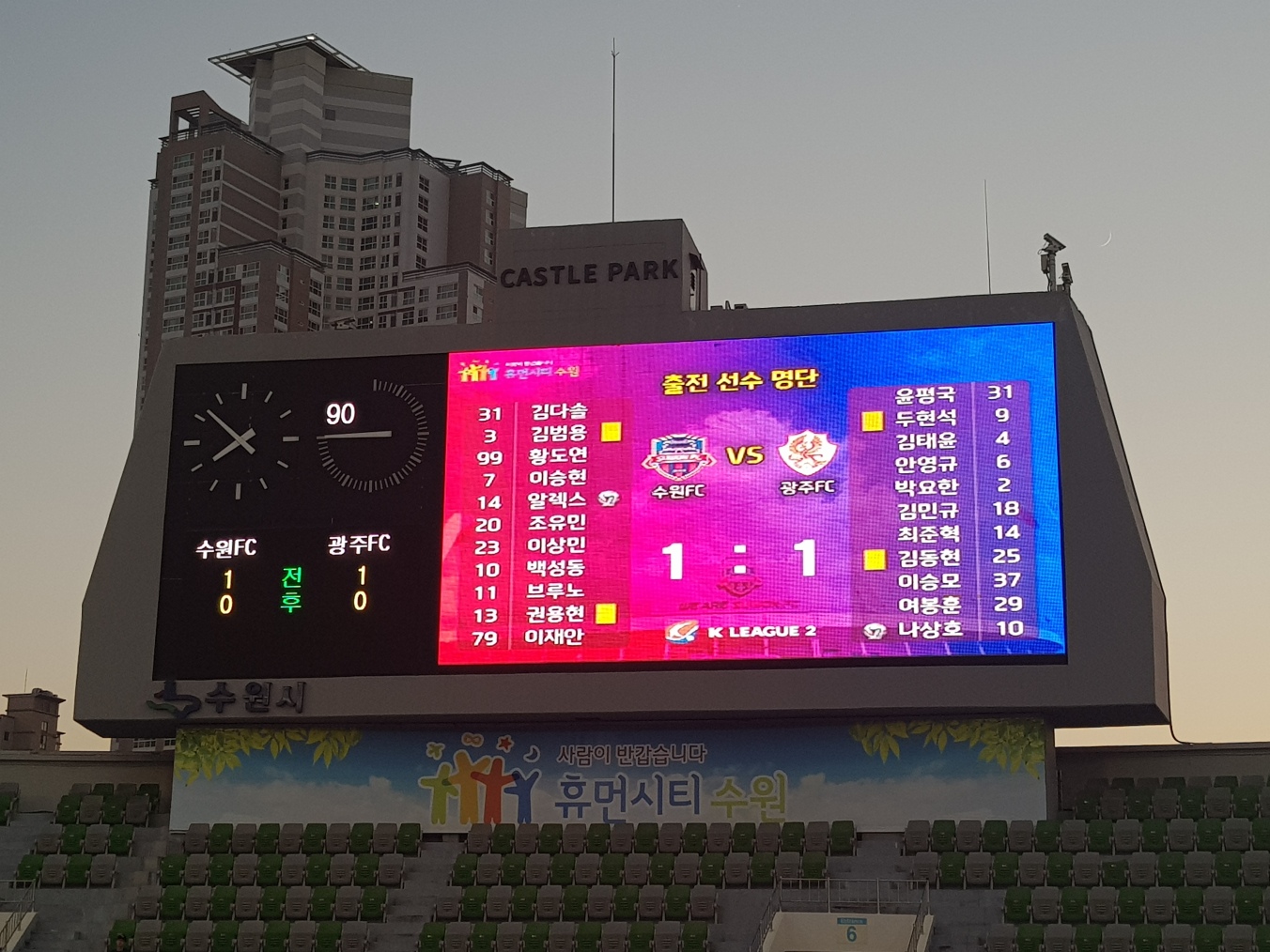 Now, the vigilant among you will realize that the 3 wins in this 4 match unbeaten run were against the 3 teams currently below Suwon FC in the league.  Well ram it.  Keep your negative thoughts to yourself.  The playoff push is on.  Hell, why not automatic promotion?  Seongnam and Asan are doing their best to throw it away.  2019 Suwon derbies here we come.

Speaking of Suwon derbies, I’m on a mission.  I reckon all you bloggers and twits out there should start referring to the “other Suwon team” by their full name.  I’m fed up with this bias against us smaller clubs. If I can take the trouble to add FC (easy enough I know), you lot can use up a few more characters for Samsung or Bluewings – if only for accuracy and the avoidance of confusion or doubt.  We may be the smaller, younger, less-decorated club but we are worthy of our place in K-League football.  The comparison may be a stretch but no-one would write “Manchester are looking to sign player X”

One other rant before I leave you.  So far this season I’ve been to away games in Anyang, Seongnam, Ansan, Bucheon and Jamsil and would like to go on record as saying that E-Land staff made Jamsil far and away the least fan friendly ground I’ve been to.  The away end had very few usable seats under cover, terrible lighting around the stadium and a lack of a proper signage.  However these disappointments were outdone by the dour-faced staff who insisted on taking plastic bottle tops off people and hovered over fans to check if anything had been smuggled in.  This despite the fact there was no opportunity to buy drinks or snacks inside the away end.  I mean, plastic bottle tops?  I’d need to be an Olympic javelin thrower to get anything near the pitch in the first place but I’m really not sure what damage a plastic bottle top would have caused.

On that negative note, I’ll bid you all a happy football-watching weekend.  It’s a home match against Asan for me on Saturday evening and then I need to work out the travel and “convincing the family” logistics of the getting to the FA Cup with Ulsan on Wednesday.  In fairness Mrs Alternative View has caught the Suwon FC bug but the problem is that Kid B will have training that evening.  We’ll see what happens.