We all know that footballers have a short career span and while in the glory days of the 60s and 70s most would inevitably open a watering hole in a local neighborhood to try and live off their fame the current trend is for each and every one to believe they can talk about the game with the same poise and skill with which they played it.

So I used to know what I was doing on a Saturday afternoon.

With this new found role we have seen an increase of touchscreen, colourful interactive boards to allow the honest pundit to inform us less-informed viewers of exactly why our team is being routed 5-0 by Barcelona, why the opposition hatchet man saw red for his fifth leg-crushing tackle of the match and to show us that the beautiful defence-splitting pass from  our favoured son was indeed not offside and that we should feel both depressed and indignant that we are not still “in the match”. Of course as is with all jobs where someone has been nepetistically elevated beyond their skill set we will ultimately witness the occasional “what did he just say” as the pundit suddenly finds himself a little out of his depth. From Chris Kamara’s missed goals to the factual monotone of Michael Owen it’s safe to say not every footballer should be allowed on our screens once the proverbial boots have been “hung up”. And so it is with great pleasure that we at 48 Shades Tower would like to share with you some of our more cherished ‘football cliches’. 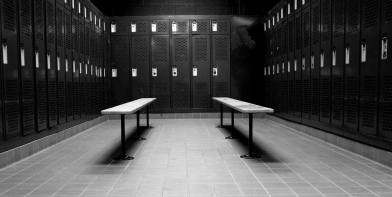 A dressing room can be a lonely place for some managers

The dreaded cliche that no manger wants to hear is that of “he’s lost the dressing room” which of course is the accusation or assumption that a team or player’s poor performances of late are down to a lack of respect or belief in the manager’s credentials and ability. We all know that footballers are a sensitive bunch and as such need to be handled and indeed managed like the equivalent of a 2nd grade kindergarten class who have been told the annual trip to the zoo has been cancelled this year. One wrong word and the club can have a revolt on their hands, one only needs to ask two of the more recent incumbents of the much coveted Man Utd manager’s jacket about this. Of course given that the majority of managers are ex-players then one assumes they too might just border on the touchy side when they feel they are not being given the right amount of praise so the potential is definitely there for a whole series of dummy spitting episodes.

Of course it’s rare that a pundit really does know what is happening in the sanctuary of the dressing room and it’s more often that not that this self-serving prophecy is trotted out way before there actually were any issues. This of course doesn’t stop the pundit throwing it out there for the reason why your team surrendered another lead and find themselves languishing at the “wrong end of the table”. Of course having grown up watching football in an era when Scottish football had managers of the ilk of Ebbe Skovdahl and Ivan Golac it wouldn’t surprise me if one of them had actually physically lost the dressing room.

Now where did I leave the team.